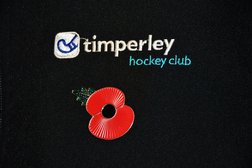 Like hockey clubs across the country this weekend we will be showing our respect for those who have died in not just the two World Wars - but all wars. We hope that all players, officials and spectators will join us in this personal moment of reflection in memory of all those who have served and of their sacrifice. Read on to find out more about a little of our club history and those hockey and cricket members who lost their lives in WWI.

Away Games
It is likely that there will also be a mark of respect before all away games, captains please check with opposition when you arrive for away games

A little bit of our Clubs History
Please also take a moment over the weekend to pop into the function room and see the Remembrance Plaque by the bar that in memory of club members who fell in WWI.

Like all parts of society the club was directly touched by World War One. The Minute Book of Timperley Hockey Club records in September 1914 that hockey will 'cease' during the hostilities - a simple few lines that follow all the previous meetings that include detailed notes of the running of hockey at Timperley including selection for matches. No entries are then listed until 1919 when hockey formally resumed. One to pause and think about for a moment and imagine hockey just stopping and not knowing when or if it would resume.

Many of you may have seen the memorial plaque in the function room near the bar remembering six Timperley members. For the eagle eyed this memorial is etched on a slate from the old cricket changing rooms constructed prior to WWI and in use at the time. Gary Fisher from Cricket, and occasional hockey player, researched the cricket records and local achieves and produced the memorial and we thank Gary helping us remember club members who didn't return to play sport at Stockport Road.

One of the Timperley Hockey players identified in the Trafford Archives is Alfred Ernst Boucher he is listed as a member of Timperley Hockey Club and lived on Queens Road, Hale. He was sent to the front on 20th July 1917 and was killed in action on 5th October 1917 he is remembered on the Tyne Cot Cemetery Memorial.

Andrew Dunlop Hughes listed on the club memorial, is also reported as a hockey player at the club. He died of his wounds aged 22 at the 33 Casualty Clearing Station at Givenchy.

Gary has also recently come across some more archive material about links to Timperley Sports Club not currently on our commemorative plague including:

Cyril Mortimer who died of his wounds on August 10th 1915 at Gallipoli. He served in the 30th Field Ambulance, RAMC, and is listed as being a member of Timperley Hockey Club. The newspaper states…

‘Private Cyril Mortimore of R.A.M.C. died in military hospital at Eastern Front as a result of burns aged 20. Son of Mr & Mrs W Mortimore of Hawthorn Villa, Grosvenor Rd Altrincham. Member of Timperley Hockey club & a keen golfer. Posted to the Dardanelles, he was going for a bathe & came into contact with a Turkish land mine, blown in the air and fell in the sea badly burned but initially not thought to be serious but took a turn for the worst’.

Alan Thompson ‘Of the Manchester's, attached King's Liverpool Regiment, youngest son of Mr and Mrs W H Thompson of West bank, Park Road, Ashton on Mersey. Wounded at the Somme in WWI, hand amputated and knee wounded. Member of Timperley Cricket club, educated at MCR Grammar’. Injured in September 1916 which would have been within the 100 day window following the start of the Battle of the Somme.

Remember sports players from this club, just like all of us, may add another poignant reminder as part of Remembrance Day.

If any members would like to help research more of our club history and help identify any other club members to have lost their lives in any conflicts please get in touch as we would really appreciate your help in adding to our club history and memorial to those club members who gave their lives. For those interested in tracing club or family members the the local Trafford archive https://www.traffordwardead.co.uk/ is a good starting place. Please let Shelagh Everett know if you would be interested in helping researching and or document some of our club history.