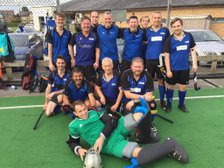 It was a bleak midday when the 6th XI mustered for their pre-match team brief from Skipper Gibson. Hunkered down in track suits & bobble hats they listened to the words of wisdom & fully understood the task at hand. Even if ‘Foul them on the 23m line’ was perhaps not the most sensible advice considering the opposition. Demonstrating the negotiating skills of Boris Johnson with the EU, the skippers latter request for volunteers to umpire the 2nd half were met with stony silence.

The first half saw Timperley advance to a comfortable 3-0 lead courtesy of goals from Gough & two from Scott who had decided to pack his shooting boots this week. The lead could have perhaps been more if some additions to a somewhat repetitive short corner routine of ‘hit it to the top & whack it’ could be found. A good overall effort left the team well placed to win the game but Leigh had shown some threat in the first half to suggest it was not a done deal.

With Rory stuck on the half line at the break discussing third party obstruction with the other umpire, it fell to Gough to gee the team up for the second half. It was fair to say that all the right noises were made, ‘Keep it tight’, ‘Concentrate’, ‘Play as a team’, ‘ball speed’ etc etc but there was no gravitas from him and it was soon clear that the team had not heard a word of it. On restart the Leigh full back pinged a 50m or so pass to one of the Leigh forwards that completely bypassed the forwards & midfield. Dribbling into the box the lad won a short corner following some feeble tackle attempts from last weeks star, Fisher. Out came the ball and thus it went into the sodden backboard with a dull thud under the body of Evans Murrie (snr), who was so annoyed he has declined to play next week. It had only taken 45 seconds or so for Leigh to claw one back.

Awoken from their slumber, Timperley quickly replied with a goal from Ben Hayward who tapped in after a bit of a melee in the Leigh box to restore a comfortable margin that remained unchanged throughout the rest of the half. Plenty of pressure, plenty of short corners and sweet F.A in terms of goals (courtesy of routines previously described).

A decent run out to be fair and it was good to see all get through the game with no misfortune.