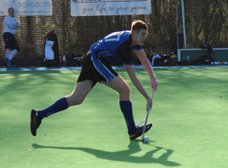 2s start the campaign with a draw

Tough day at the office

As Timperley started their 22/23 season there was a familiar feeling as they travelled to Alderley Edge for their first game.

With the promotion the majority of the team were debuting for the first time at that level but there was an air of confidence with the squad that travelled.

The game started with Timperley dominating possession & doing all the early running with the pressure eventually leading to a goal from a deflected PC put home by Dan C. It was well deserved however they were unable to convert that pressure into any further goals. With the lack of conversion Alderley took confidence and started to come back into the game, but, like Timperley were unable to threaten Jones meaning that Timperley went in 1 nil at half time.

Despite an Albert team talk at half time Timperley came out slow in the second half, with Alderley exerting renewed pressure on Timperley, this led to the first of their 3 PC’ s. The first of which they converted levelling up the score. This did stir Timperley into a reaction as they started to apply more pressure which led to Nicky B scoring a great goal in the top right corner which restored Timperley’s lead.

The back and to continued as Alderley pushed again, levelling via another penalty corner.

It was Timperley's turn to look to get in front again which saw a lapse in concentration as they a mistake led to a breakaway from Alderley which allowed them to take the lead for the first time in the game with about 10 mins to go.

The tension was palpable amongst the supporters but Timperley continued to push looking for the equaliser, which duly came courtesy of Wilf with less than a minute to go.

It was the least they deserved on the day. Timperley were disappointed to come away with only a point but they showed great resolve to keep going. They do however need to be more clinical at this level.

Next week sees us do it all again at home to Crew on Saturday at midday, where the boys will hope to get their first win of the season under their belts.

MOM - Wilf
DOD - Oli Hatton (for not knowing his Miller's)