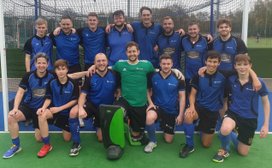 Not pretty but job done

Timperley welcomed Crewe Vagrants to Stockport Road for the first home game of the season. With so much recruitment over the summer Timperley boosted an extremely strong squad that they hoped would be too strong for the visitors.

Whilst the pattern may not have been perfect Timperley found themselves 2 up within the first 5 minutes. Firstly Oli Hatton found the back of the net from a short corner before a minute later Higgin turned the ball over and after his initial shot was saved Burgess found Sadri who in turn applied the finish.

At 2-0 Timperley calmed but still lack the composure to really impose themselves on Crewe. Passes not quite finding their men or the final touch letting them down. Fortunately Crewe were unable to capitalise on this as the lacked any real threat.

After Timperley let a couple of guilt edge chances go they finally added to their tally in the 29th minute after some nice interplay down the left saw Sadri find space in the D who, in turn found Miller how made no mistake with his second open net opportunity. As the half came to a close Crewe almost pulled one back as a flick hit the post.

It was clear from the words delivered at half time that Albert was not impressed with the display the team were putting on and made it clear what his expectations were for the remainder of the game.

It was Timperley who scored first again as some good work down the right saw the ball find Roberts who hammered home on his reverse.

4 became 5 as Hatton found the back of the net from another short corner to effectively put the game to bed.

At 5 nil Timperley still were unable to click as individual errors continued to impede the teams progress and as a result the scoreboard. Whilst the shouldn't have, Crewe got on the board as one turnover over too many allowed Crewe to react before Timperley could reset as the ball was deflected home.

Crewe appeared to tire as Timperley had the lion share of possession in the final 15 minutes. Whilst the men in blue were frustrated they did manage to add one more to the tally as a Higgin cross/ shot found Miller in the right place again as he doubled his tally.

Plenty to work on in the week as the team head to Deeside next week for what will no doubt be yet another test.