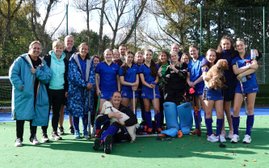 Bumper catch up this week as the league season starts and all the #oneclub news for players, parents & supporters!

Welcome back to our weekly round up of all things Timperley !

September has flown by and this week we welcome in the new season and catch up with events following the social media 'pause' as part of showing our respects following the passing of the late Queen. Huge thank you to everyone who supported and paid their respects to the Queen prior to games during the period of mourning. Soooooo much has been happening and thank to everyone whose helped get all the start the season support work done on and off the pitch !

League hockey is back for juniors and seniors !
This weekend the League campaign start for all senior teams and our U14 and U16 Boys and Girls, plus our regular friendlies for Badgers and Beavers and Cheshire and GM tournaments for U10's.

We've revamped our weekly social media updates for Fixtures and Results and have been testing the new formats this weekend and hope you like them! Big thanks to Connor Miller (and Sophie Binder his wing woman!) for sprucing us up! Check our @timperleyhockey on Instagram, Twitter and Facebook.

Highlights from the opening weekend include a big win for the Ladies 1's with 4 new National League debutants - Ruby, Lilia from our U16's, Sophie Binder from L2's and new recruit Jess Sutton from Lymm HC. Congratulations to Albert, Woody and the squads on a fine 4 - 2 win over Pendle Forest. The Men's 1 head to Preston HC today (13:30) for their opening game today.

We launched our new Men's Development Team playing in NW League who drew 0 - 0 with Bowdon and huge thanks to Neil Hornby for helping get the side on the pitch and Duncan Brown for guiding team youngster and senior through their first game. Development teams play in the League (but no points awarded for games) and are a key part of our approach to developing young player transition and development and we will be mirroring the approach with the boys / men as we've done with the Ladies 6's.

This weekend we've had 21 fixtures offering hockey from U10s to O50's and everything in between ! Thanks to all those who made this happen, captains, umpires, coaches, managers and players and parents. Big shout out to the Captains who also gave up time for the annual Captains #101 session this week on the 1001 things they have to do off the pitch to make hockey possible for so many. To help them do their job to get over 250 players organised each week please make sure you keep your availability up to date on pitchero and respond promptly to selection requests.

Patty Challenge Cup
We held our 2nd Patrick Marston Challenge Cup competition v Bowdon on 10th September in memory of our dear friend and huge supporter of Timperley and someone so missed around the club. Having been pipped at the post in 2021 losing by 1/2 a point this Ryder Cup 'team' style competition (all teams are equal and 1 point for a win and 1/2 for a draw) proved another success with all the senior teams playing and Badgers and Beavers.

Patty would have loved it - a slow start from the Blues and then a romping middle order with a clean sweep with the Badgers and Beavers back to back wins for senior team Timperley had got the trophy win in the bag before the finale M1s game. We won the overall competition 10 points to 6 and the M1's won 3-2 in their first win against Bowdon 1 for many a year ! Thanks to the Horan Family who donated the Patty Cup and the fine words from Adam who summed up superbly the friendship between the two clubs and the how well the competition captured the spirit of all things Patty and hockey - followed by good few toasts to Pat in packed clubhouse afterwards !

End of an Era ....a little delayed !
Last Sunday we hosted the finale Tournament of the former Cheshire Women's Hockey League (now replaced by the NW hockey League) bringing together teams who played in the old CWHL for one final hurrah (and some cake!). Fielding a young side showing the futures bright the Ladies Team had a fabulous day and finished runner up - and there were lots of smiles (and dogs??!!) as you can see in our photo of the week !

Talent Development......
We're really proud to offer hockey for all ages and abilities at Timperley across the masters, seniors and junior set up. We continue to evolve our junior activity under the brilliant leadership of Anna Mawby and her team and our new Monday Night U14 and U16 coaching sessions are now settling in. This all links to the England / GB Hockey Talent Framework and we're hopefully completing all our paperwork to be awarded TALENT CENTRE ACCREDITION over the next few weeks. This is the gold standard new award for Club's Junior Hockey Development and links through to our junior transition and senior programmes too.

We'll be running a parents session(s) over the net few weeks once things have settled down to help share more information and understanding of the framework behind our approach to junior development from cubs to junior teams and transition to senior hockey and at the top end through to playing1 and 2's hockey. Dates will be confirmed this week.

England Hockey Talent Academy - we are one of 17 clubs nationally awarded a three year license to run these new performance academies for 24 boys and 24 girls (aged 14 to 18). We've been running trials over recent week for over 180 players fed in by the EH system - selection will be completed ready to start fully on Monday 10th October. Rob Turner is the overall Head Coach (and lead boys coach), Zoe Sinclair is lead girls coach and Caroline Small Manager. Thanks to Rach Small, Pat Jones, Albert, Carwyn Nash, Connor Miller, Gaby Goodman, Helen Weston and Ross Small who've all supported running the trials.

Supporting all things blue !
Whilst our number one priority in September is to get as many people playing again, and all our off field set up done (from DBS's and safeguarding to player registration, logistics and affiliations) - its also that time of year when we need your support to get the money that supports making all the hockey we offer happen !

We're on the final countdown to pay your 2022 - 23 Subs and Fees (senior and juniors) - deadlines are fast approaching.
- 26th September to pay by instalments
- 30th September for payment in full
- 8th October - no pay no play kicks in (unless been in touch!)
Click on link for full details and how to pay.

Match Fees are collected (as we did last season) via Pitchero - so make sure your account in set to receive messages / email or download the Pitchero Club App and keep it logged in ! Please also pay Match Fees asap to help reduce volunteer time chasing players up ! If you're three match fees over due now this will be fed into selection and if not paid or notified as to a valid reason this will impact selection.

This week we have a challenge out to all teams and our hockey family to source a minimum of 25 LOTS for the The Great Timperley Auction 2022 - Hockey Auction Lots Challenge !. If you can help donate a LOT (see link for examples) get in touch with your captain, Anna Mawby, Shelagh Everett, Andrew Foster, Timur Asar or Jo Robinson by Friday 30th September so we can get the LOTS loaded on the online Auction site

This is a big club fundraiser and we're hoping to raise £10k to get the decking replaced next Spring - we've raised £16k so far and with costs over £30-40k this is a big push to get this project over the line as a facility everyone can enjoy. Thanks to Alistair Hollows for his work and help to support this project too.

Sponsorship and Banners !
Why not show your business or employers support around the pitches with a Banner ! from £300 for 12 months we've a new banner supplier and the quality is super (See the new PGN Kitchens banners) Contact Shelagh Everett or Neil Scott as we've an order for banners going in by the end of the week so would be great to get some new supporters banner up - or anytime (the 12 months runs from when the banners taken out)

Launching this week ..... Sponsor a 1's player - new package of options available to support the cost of running our National League Teams and a new super supporters option to be a 1st Team Patron from £150 a season including free entry to all games, a patrons lunch and Patron's Gift ! Contact Shelagh Everett if interested and look out for the launch this week !

Finally, three Timperley players fly out to South Africa this week for the World Hockey Maters World Cup in Cape Town for 10 days of hockey on the world stage ! All the best to Sarah Impey, Lou Hutchinson and Debbie Chalcroft for the tournaments and we hope they can follow David Hans (England Mens O40) by bringing home another Gold Medal to Timperley.